So what, you might ask is the chariknitty? Well, it was the phrase coined by my wonderful friend Tina Hyde, when I was looking for a name for my Facebook page that was promoting my charity knitting. In the end, I went for Lyns and needles (suggested by Dave Baker, one of the regular viewers to my Facebook live streams) as a page title as I felt it was easier to get people to remember that. I loved the title Tina came up with and so decided to use in my blog.

I learnt to knit many many years ago as a child. I can’t remember who taught me and recently I asked my 93-year-old mum if it was her or my grandma and she seems to think it was her although we’re not quite sure. No matter, the fact is that I learnt to knit when I was very young, a skill that I have treasured all my life. When my children were young, I used to make them toys and jumpers and then I had a lull in my knitting. However I recently decided to pick up my knitting needles and get click clacking for charity. I have decided to support as many Isle of Wight charities as I can. I’m currently writing this blog in a new coffee shop in Pyle Street in Newport- Comicoffee. I know the owner, Matt and decided to knit him (The superhero) 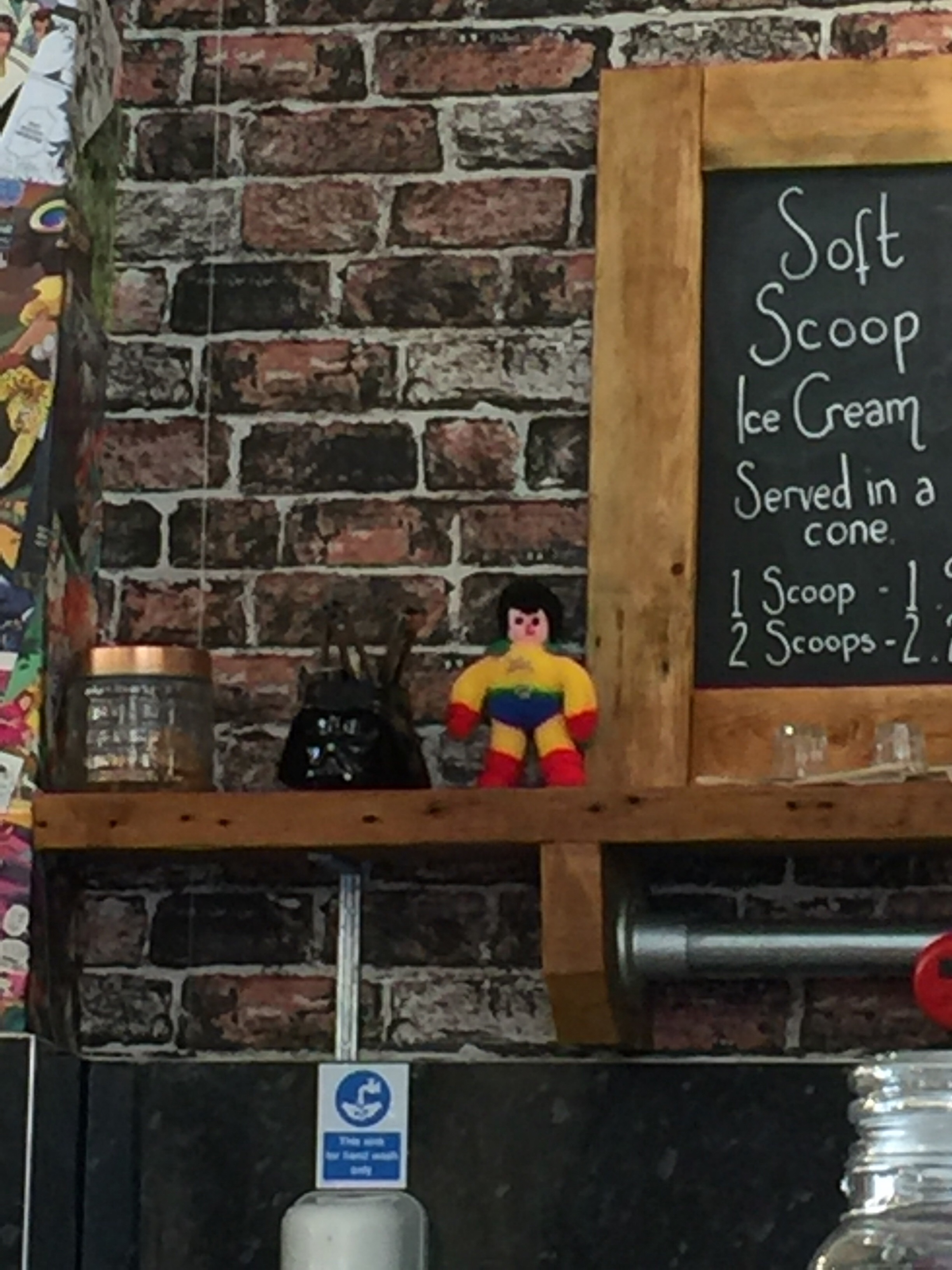 as a good luck charm. I am delighted to see him sitting on the shelf, that is the superhero not Matt!

Over the weekend I became an award-winning knitter when I was presented with three gold medal certificates at the Isle of Wight County show. 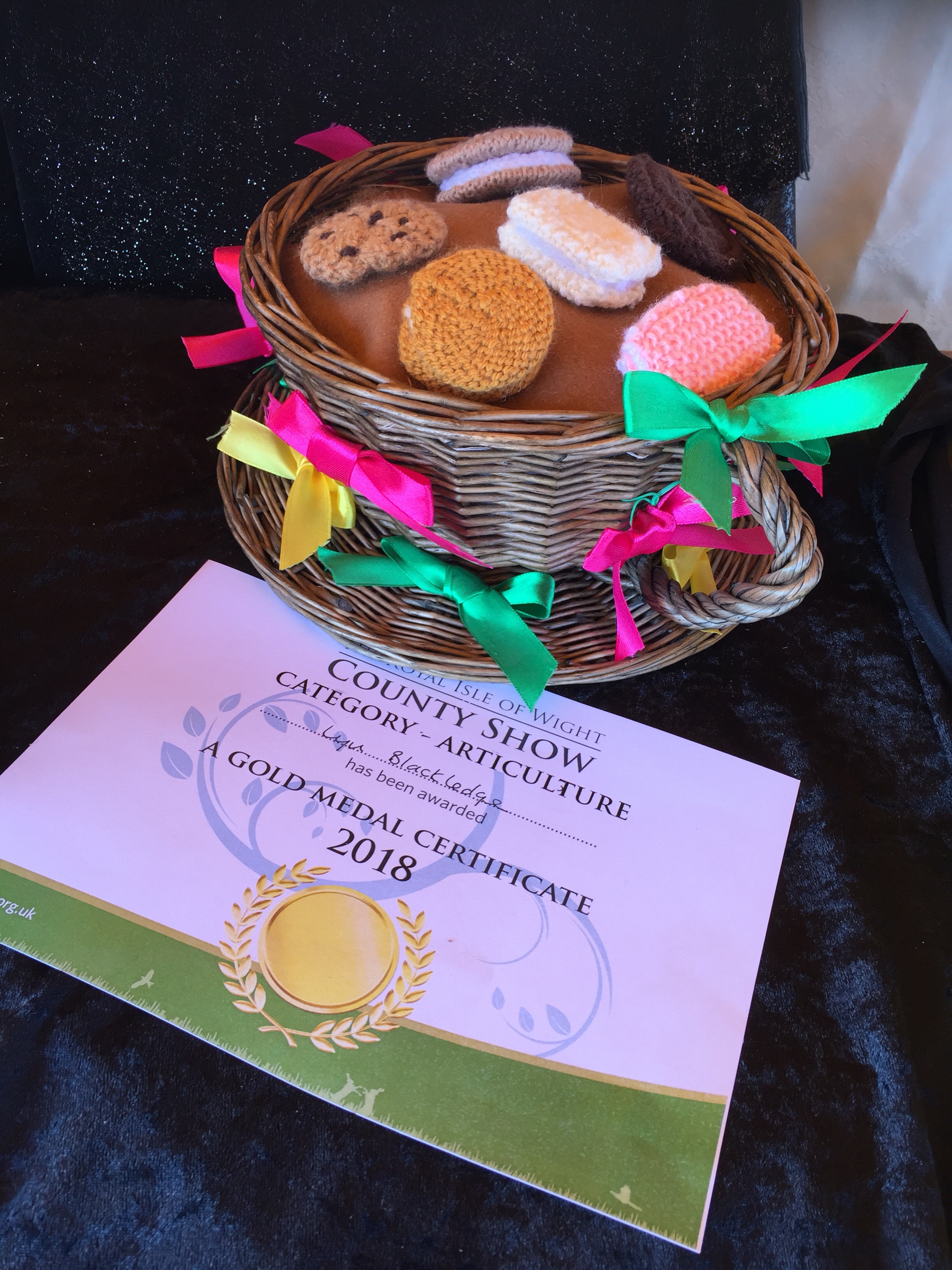 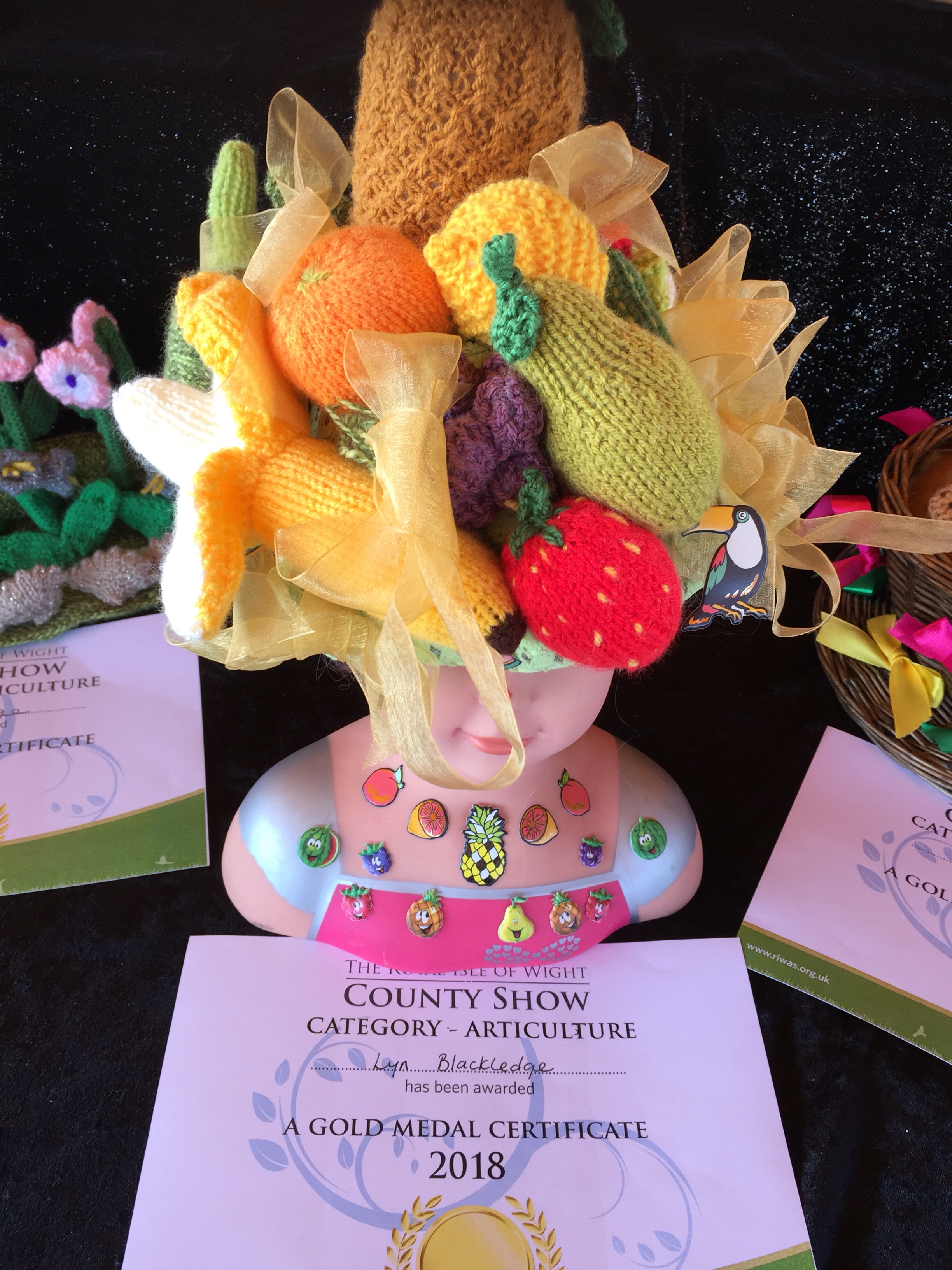 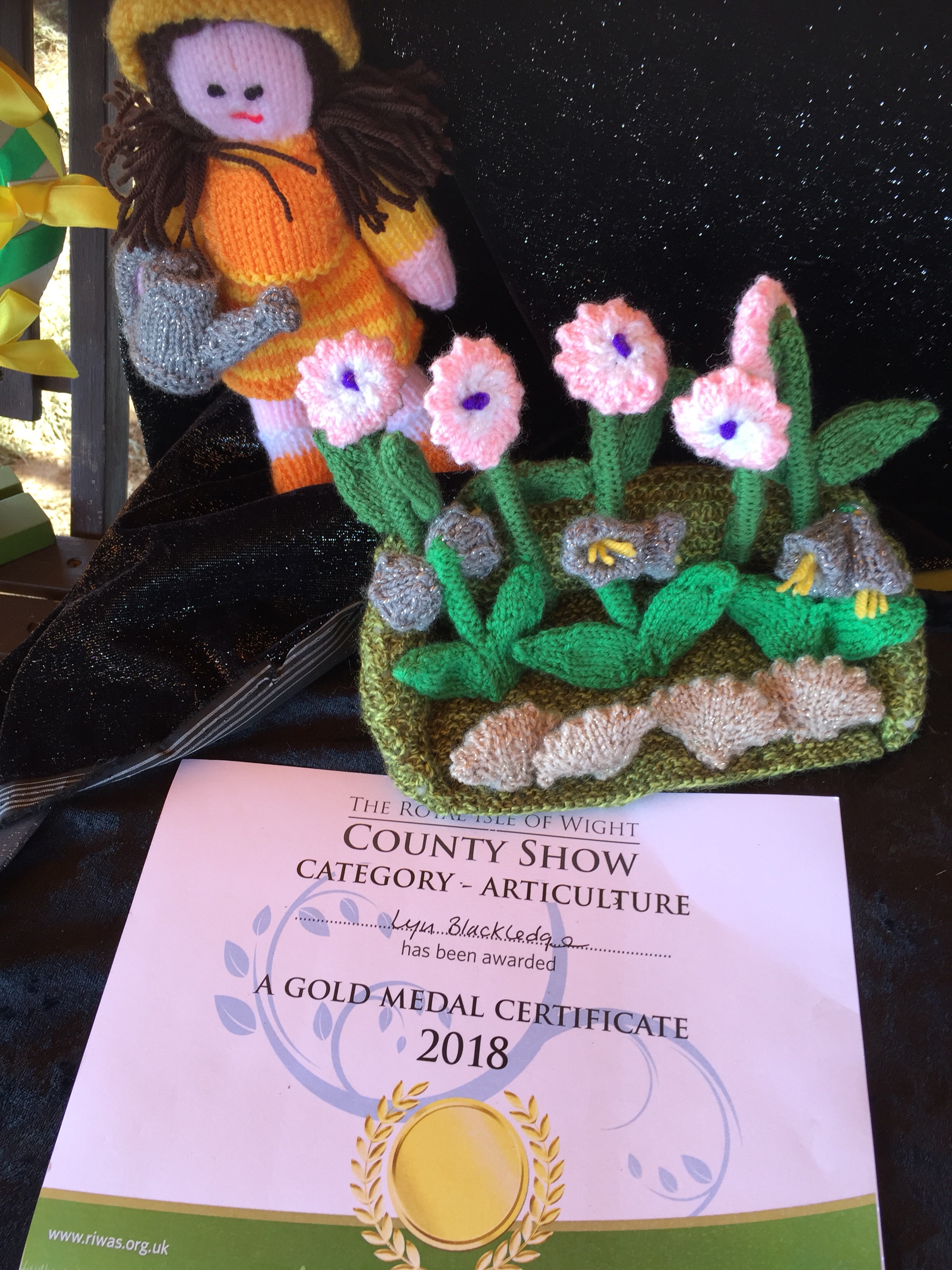 The big wicker cup was lent to me by Kevars cafe in Ryde. I decorated it up and filled it with stuffing with a felt top to look like the tea and then knitted biscuits to go on the top. I called it “Elevenses to dunk not to dunk?” And entered it in time for Tea section. The second one was called with “Apologies to Carmen Maranda” and was a hat laden with fruit and veg which I entered into the fruit and veg section. I didn’t want to do a trug of fruit and veg as I like to be a little bit more out of the ordinary. Well, it paid off and it was a lot of fun doing it. The third entry was “Mary Mary quite contrary”  which was entered into the “In Bloom” category. It was very much a last minute knit. I had ordered the knitting book with nursery rhymes in it and was heading off to London for a few days just before the County show. The book was due to arrive on the Friday as I got back but arrived on the day I went. When I spotted Mary Mary in the book,  I just had to knit it for the show so I put it to my luggage and soon the needles were click clacking the silver bells and cockleshells and pretty maids all in a row.

My prime reason for entering my work for the Articulture tent, was to put the knitting on display as I sell it for charity if I haven’t given it away as gifts.  Therefore more people would get to know about it so basically it was an awareness raiser. Imagine my delight then to receive the three gold medal certificates. I have won awards  before but not for my knitting so I can now add that to my portfolio.

I knit everywhere and anywhere I can. I don’t have a car so travel on the bus and do much of my knitting in my NET time i.e. no extra time. It has led to some very interesting conversations and even to the sale of knitted cupcakes on the bus to a local councillor raising funds, on that occasion for the Earl Mountbatten Hospice. 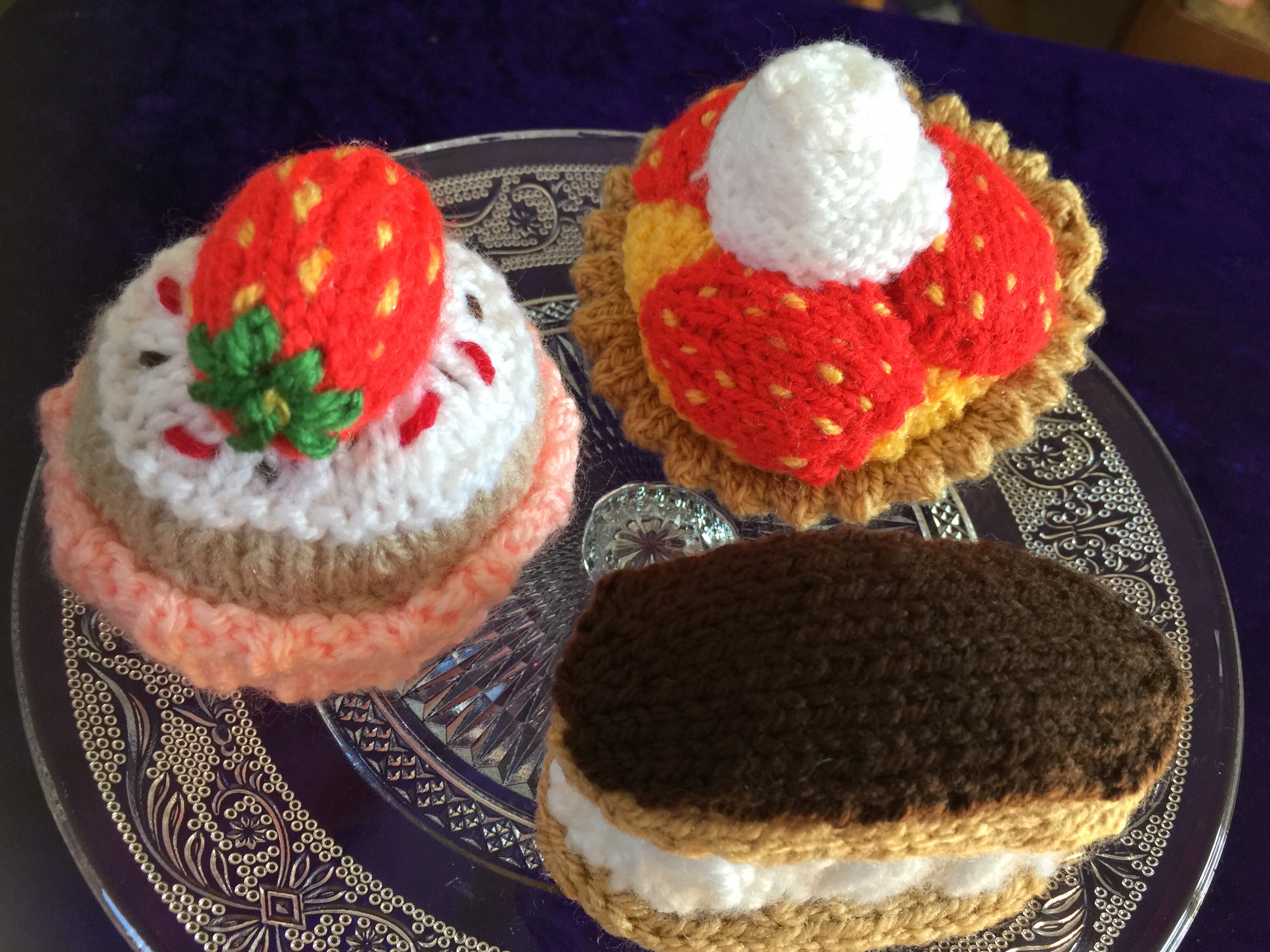 I am just waiting for a friend to join me in Comicoffee before I head off to Easy Weigh, A lovely shop a few doors along in Pyle Street, that sells all sorts of things from coconut oil to herbs and spices all sorts of different flours to eco-friendly cleaning items etc. Suzy will be hosting a cupcake sale on Thursday to raise money for the breast cancer charity. Not only have I knitted  some cupcakes for her window display but also some little pink bras. 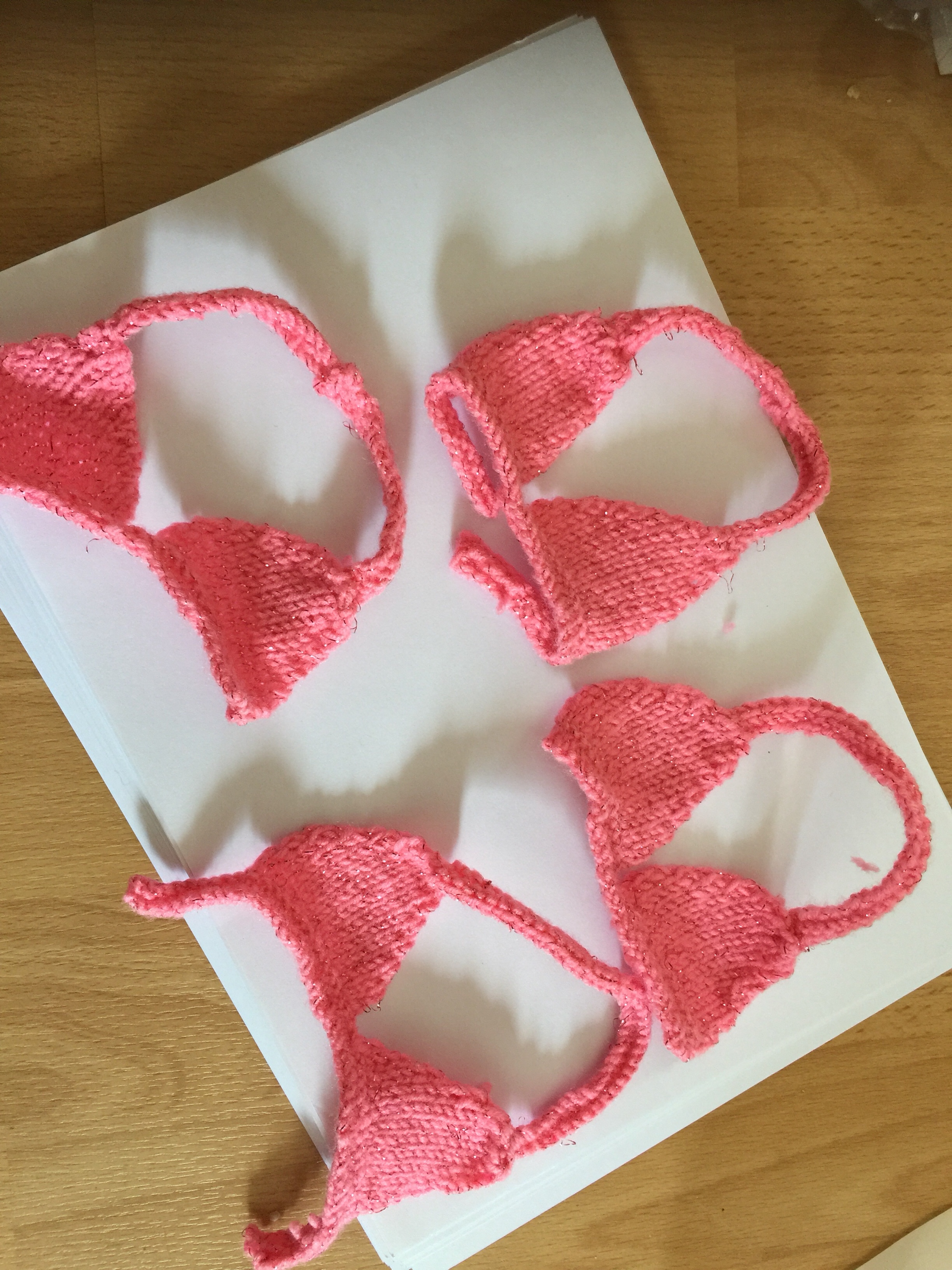 I have now got myself a nice little pink shiny orderbook as I am getting so many orders,  that I need to keep a list. I have orders for sunflowers, footballs, sheep, different breeds of dog, ponies and much more. I never know what the next challenge will be but I love it. I’m having so much fun and I find it so therapeutic. Even better it’s raising much-needed funds for Isle of Wight charities. Long may I have strength in my hands to make my needles click clack.